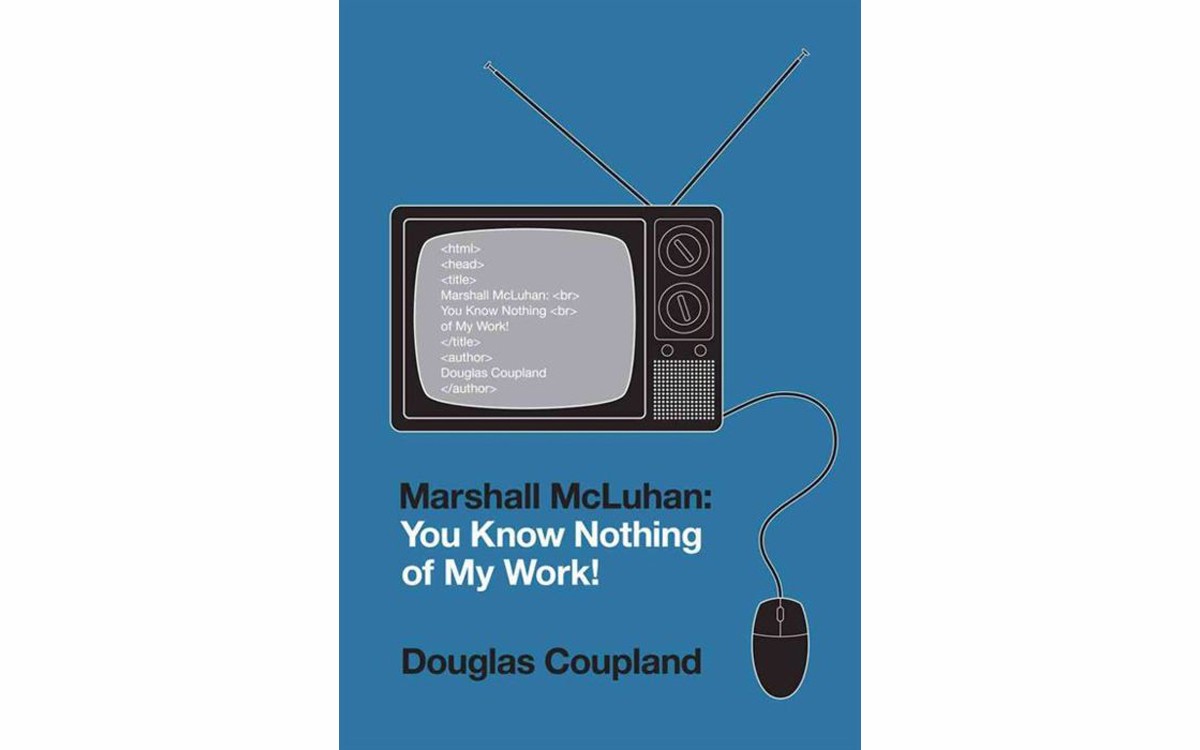 A biography of Marshall McLuhan, one of the smartest media thinkers ever, written by Douglas Coupland, one of my very favorite authors, was going to be pretty much a no brainer for me to pick up and read and enjoy. And I really did, although I think this book probably is only for a particular type of nerd. (Pretty sure you know who you are.)

As you’d expect from Coupland & the subject, the style of the book is sort of meta. Bits & pieces about McLuhan, mixed up with other bits and pieces. I didn’t love the style, but I did find a bunch of the book thoughtful & provocative. And it really is amazing how clearly McLuhan could see the future — I think he & Neil Postman figured out decades ago things we’re only just now figuring out together as we all converge online.

Here’s what Coupland had to say to start the book:

Life becomes that strange experience in which you’re zooming along a freeway and suddenly realize that you haven’t paid any attention to driving for the last fifteen minutes, yet you’re still alive and didn’t crash. The voice inside your head has become a different voice. It used to be “you.” Now your voice is that of a perpetual nomad drifting along a melting landscape, living day to day, expecting everything and nothing. And this is why Marshall McLuhan is important, more so now than ever, because he saw this coming a long way off, and he saw the reasons for it. Those reasons were so new and so offbeat and came from such a wide array of sources that the man was ridiculed as a fraud or a clown or a hoax. But now that we’ve damaged time and our inner voices, we have to look at McLuhan and see what else he was saying, and maybe we’ll find out what’s coming next, because the one thing we can all agree on is that the future has never happened so quickly to so many people in such an extreme way, and we really need a voice to guide us. Marshall identified the illness and worked toward finding ways of dealing with it.

And one must remember that Marshall arrived at these conclusions not by hanging around, say, NASA or IBM, but rather by studying arcane sixteenth-century Reformation pamphleteers, the writings of James Joyce, and Renaissance perspective drawings. He was a master of pattern recognition, the man who bangs a drum so large that it’s only beaten once every hundred years.

And any book like this would be incomplete without a little Canuckiana, so here’s a quote from McLuhan: “Canada is the only country in the world that knows how to live without an identity.” Interestingly, I think that while that would be considered pejorative to most in the US, I don’t think that’s how he meant it.

One very strange fact that floored me: McLuhan’s brain was supplied with blood through not one but two arteries at the base of his skull. In case you’re not up to date on your human physiology, that’s not normal. Sometimes happens in cats. Very rarely in humans. But you have to think that it had a real effect on how he thought and lived (and probably how he died ultimately, since he had many small strokes and blackouts throughout his lifetime).

And one last thought to leave you with by McLuhan himself: “Our ‘Age of Anxiety’ is, in great part, the result of trying to do today’s job with yesterday’s tools– with yesterday’s concepts.”

I think we live in a complex, rapidly evolving, unfamiliar time now — so much — technology, mainly — feels like it’s changing so quickly that it’s hard to integrate all the changes in our lives, let alone to really understand them and their impact. It’s comforting to know that at least a few people felt the same way nearly 50 years ago.